Posted on September 11, 2018 by leawalkerblog

Inflation in lay man’s term means there’s too much money in circulation. Thereby affecting the people’s spending and the cost of goods. Let me elaborate, when people have money, people tend to spend. And when people spend, the prices go up because there is demand. This is the normal reason of inflation.

Sometimes, it is caused by stimulation done by the government. The government recently gave the people Tax Break, in effect of the TRAIN Law. What we saved in taxes prompted a rise in our income.

Also the Employment Rate in the Philippines rose up to as high as 95.3% . Which is by far the highest in at least 10 years. So yes, the BUILD, BUILD, BUILD program of the President is giving Filipinos more job. Another thing, the BPO Industry in our country has increased a lot of employees’ earnings, it being the highest source of Philippine income in the last 2 years. Not to mention our dollar earners by way of our Overseas Foreign Workers. So yes, there’s too much money in circulation these days.

That’s why our Real Estate Industry is at an all time high. Developers are constructing left and right. And they are selling like hot cakes. Also, our bank loan rates are very low.

Both if you ask me, are very good indicators of a robust economy.

BPI is offering a 4.75% interest on Loan Rates now. Compared to most banks 6 – 12% per annum interest in the past years. Lower Rates mean that our banks have a lot of money to spare.

So should we worry about the rise in inflation this year?

Well, take a look at the Chart. Between 1980 and 1992, the highest inflation rate was 60%. The lowest was 20%. History will tell us why. If you’re not busy, google will explain when you do your own research.

🙂 I will tell you though, this was when President Marcos was ousted. And during the reign of President Corazon Aquino. Enough said. 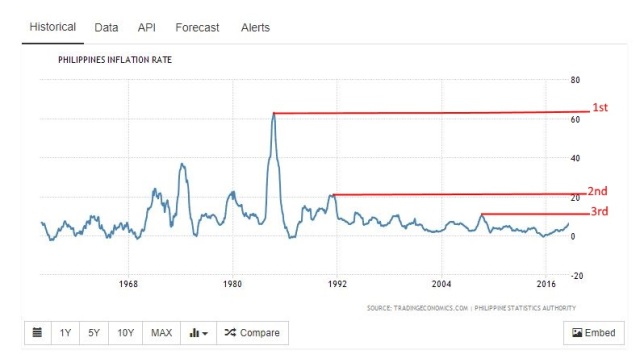 Since then our inflation rate has declined. Except during President Arroyo’s time when inflation rose to 11.4% . Fundamentals will explain this rise. Just check what happened back then.

With the stimulation done by the government, coupled with growth in our country’s investments, I believe that our inflation rate is within normal range. For our country, that is.

I would like to say though, the Philippines is far from being rich. Our GDP per capita (income of each citizen) is less than $3,000 per year as per record. But the chart will show you a steady growth since 2016. That is something. At least now, we are seeing where our monies are going. 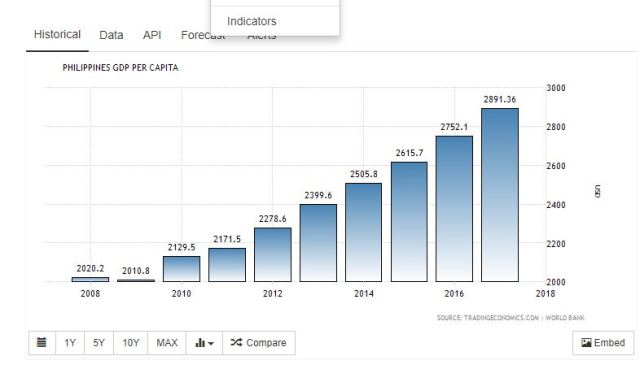 To all the investors out there, this means that there is a lot of room for growth in my country. So come here and make money with us.