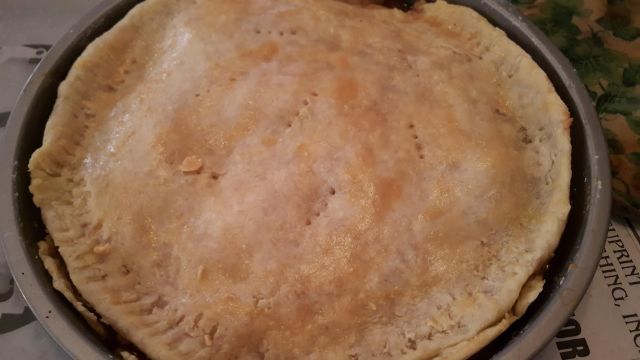 Thanks to Food Network for the filling.  Mine was the simplified version because there are ingredients that we do not have here.

Still, my first time attempt to baking an apple pie , was a success. It smelled good and it tasted so good.  🙂

Note: I used 7 tbsp. of water because the dough was so dry.

DIRECTIONS: (How I made mine. )

In a bowl, mix the flour , salt and the sliced butter , using a fork until the mixture looks like coarse crumbs .  Stir in enough water until flour is moistened.

Divide the dough into 2 ball shapes. And wrap in a “cling wrap”. Then refrigerate for at least 30 minutes.

Crust 1 – Knead dough into a flat surface. Place the dough into the pie pan and add the filling.

Melt the butter into slow fire. Add the sliced apples. Sugar and cinnamon. Cook for 15 minutes.

When apple is soft and cooked, separate it from the juice. Leave the juice in the skillet and simmer until it has caramelized lightly.

Place the apple and the caramelized juice on top of  Crust 1.

Knead dough on flat surface. Place the dough on top of the filling. Fold the top layer of the dough under the edge of the bottom layer. Press the sides with fork. And brush the top layer with egg wash.

Poke the top layer with fork or slice it to create small vents.

Bake for 45 minutes. Or until the top is slightly brown.

Serve hot or cold. Does not matter. It’s delicious either way. 🙂