Posted on September 21, 2017 by leawalkerblog

Arizona , U.S.A. is famous for its canyons. Grand Canyon National Park gets visited by millions of tourists every year because of its beauty. But do you know what is the most expensive photo today? No, it’s not a picture of the Grand Canyon.

It’s a black and white photo of GC’s sister, the Antelope Canyon, named Phantom by Peter Lik which sold at a whooping $6,500,000.00 . Oh yes, that’s how expensive it is. One can only dream of reaching such level in photography huh?

I am so “mababaw” though. That’s shallow to my english speaking friends who read my blog.

My take on Antelope Canyon got acknowledged by fellow photographers in viewbug.com . I did not win the major prize. I wish! 🙂 But I am so happy with 10 Peer Awards and 10 Photo Trifecta Trophies. Thank you.

If you scroll down on my picture, you will see that I’m telling the truth. ha ha. The awards are all there. 🙂

You see, I did not study Photography formally. So to be noticed by professionals worldwide, it is already an honor to me. I appreciate their generosity. Again, thank you Viewbug community. You make me strive to do better. And thank God for the gift and the chance to travel. 🙂

The hubby and I visited Antelope Canyon last Spring. It was already crowded at that time. I heard that it is worse during summer and fall. So I’m glad that we went there just at the right time.

Why is that important? Well, Antelope Canyon is a lot smaller than the Grand Canyon. And if there’s a thick crowd, it would be very difficult to take pictures. You need to respect the other tourists and make sure you do not disturb them when they are taking photos too. You’re only given a few minutes to enjoy the place because the next batch is about to come in already. One way going in. And one way going out in some parts of it.

I think that’s what I did not like about my experience. I felt like we had to rush because we had to give way to the next scheduled tours. Unlike Grand Canyon, the place is huge so if you want to sit somewhere and enjoy the beauty of nature around you , you can.  Here, there’s no such thing. Oh GCNP is managed and protected by the National Park Service. While Antelope Canyon is managed by the Indian Reservation. Both are tourist traps but I saw how the park rangers work to protect Grand Canyon. With Antelope Canyon, I can only hope that they will take care of the place as much.

So here are some of the photos I took during our trip:

We rode in one of those trucks. The ride to the Canyon is about 10 mins. It was beautiful and not so rough. At the entrance, where we paid , there’s a parking space where you can leave your vehicle. I suggest that you come early because it gets full, fast. Bring water and food because there’s no restaurant there. And no nice bathroom. This is not a National or a State Park, so don’t expect too much. You’re here for an adventure. Period.

This is the entrance to the canyon. It’s like going to a small cave.

The canyon was formed by sandstone erosion, during flash floods. With passing time, the erosion made the corridors deeper and the hard edges smoother. Hence, the “flowing shapes” on the rocks.

It looks orange outside. But wait till you get in. The colors change depending on where the sun ray hit the canyon.

See the shapes?  That’s what flashflood and monsoon rains did to the canyon. I would not want to be there when that happens. But we all can agree how beautiful that looks like. Right?

The rich orange color in this picture makes it look like it is on fire. I was so amazed. And yes, it was difficult to get this picture, considering the crowd. But I’m glad I got some nice ones. 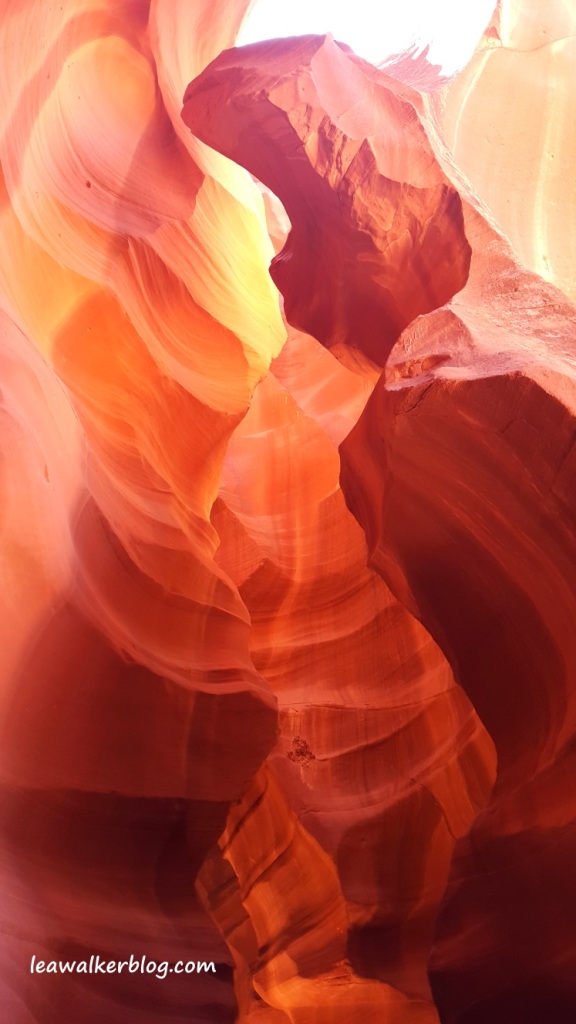 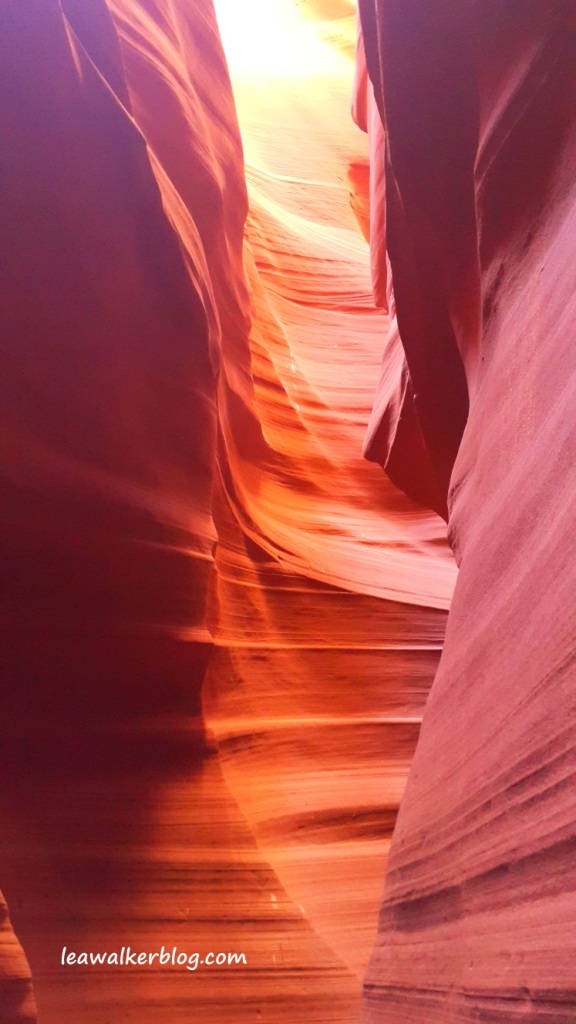 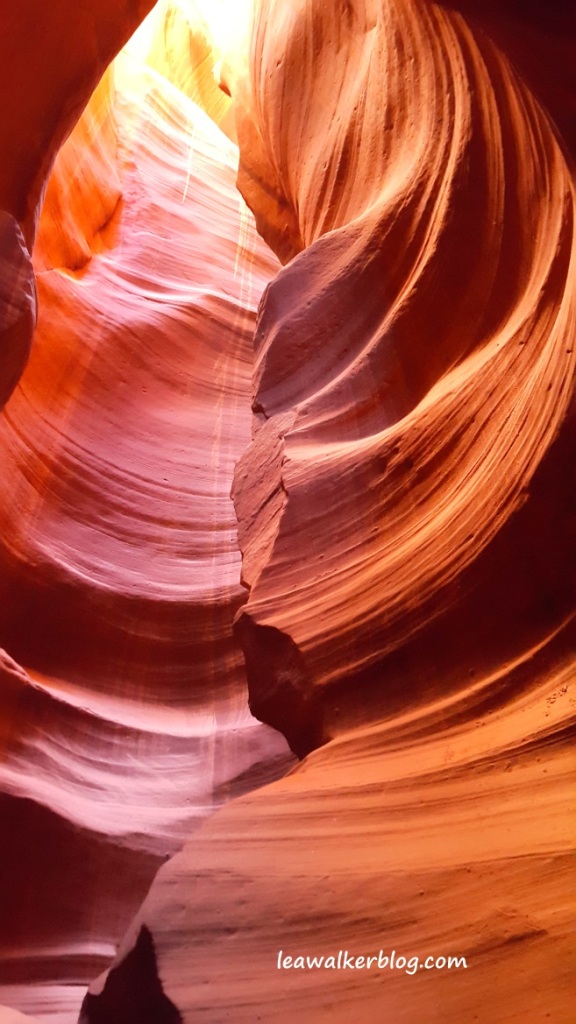 Light came in through the cracks.

I think they called this the “Fire Fall”.  It’s like a waterfall of fire.

Art. The tour guide put the branch there to give drama to the picture. I don’t get it. But there it is. 🙂

That’s the sand’s reflection floating on air as it was hit by the sun ray. You have to be there at a certain time of day to get this effect.

And of course, what’s a vacation without souvenir photos? 🙂 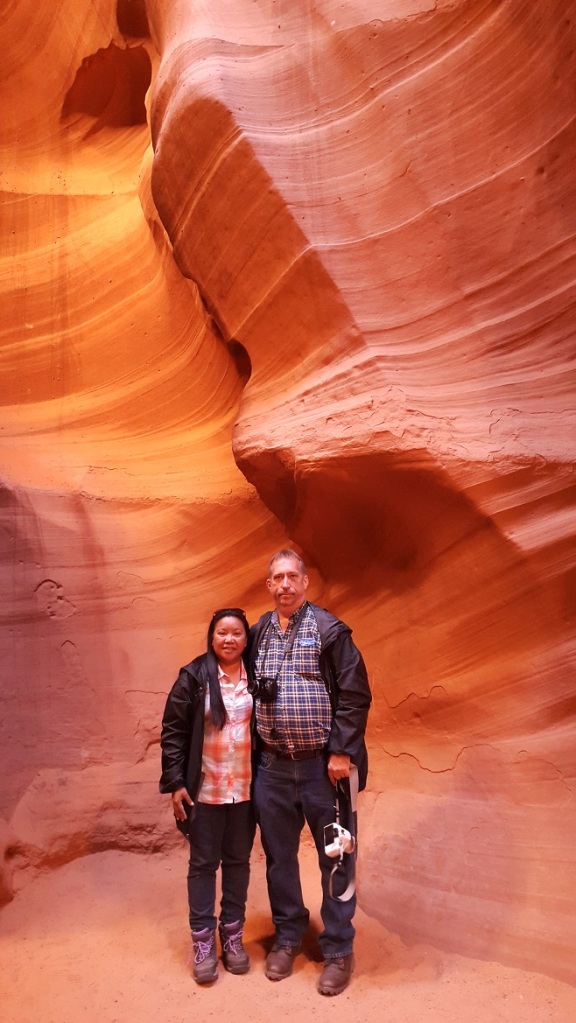 Antelope Canyon is located in Page, Arizona. There is no need to book a tour there. You just have to be there early so you can get a schedule.

Thank you everyone for traveling with us. See you again next time. 🙂