I have been remiss on my blog again. I apologize everyone. I had a really hectic month before I left for our yearly vacation. Work’s been busy , as usual.  I just got so tired most days that I didn’t have the chance to write anymore.

I am cutting off my Philippine Road Trip 2014 blog to make way for our US Roadtrip this year.

We left Davao City on September 30. We had to stay overnight in Manila since there’s no flight from Davao that would make it to our early morning flight for the US.  We flew with Delta this time.  And note, they are now located in Terminal 3.  We stayed at Remington Hotel because it’s just near the airport. And the cost is okay,  for an overnight stay. I’ll write a review about it and the rest of the hotels we’ve stayed at after our road trip. 🙂 I’m writing a review about Cebu Pacific as well.  For those who frequently travel, you would want to read those.

October 1 – we arrived at the airport 3 hours ahead of time. That’s to make sure that we finish the immigration process and the check point inspection on time. As you know, when you’re late, things usually go wrong. That’s just how life works right? haha So we try to be early. That way, we do not get stressed. 🙂

Boarding with Delta wasn’t a problem. And the flight went well.  Until we reached Japan.

Our departure was delayed because of some aircon problem. It took them at least an hour to fix such. So that meant an additional waiting time of 1 hour.

And then, we were advised that there’s traffic at Detroit Airport.  So our landing was delayed for another 30 minutes. We were having fun huh? lol  We were told, that the  incident in Chicago’s O’hare Airport the previous month caused a lot of problems for several airports. Hence, the traffic.

But since it’s the airline’s fault, they moved our connecting flight to a later time.

Ok, I mentioned above that there was a traffic delay right? Imagine how many people were affected with several delayed flights? And imagine how long the line was at the immigration counter?

Yes you guessed it right. Very long. ha ha… But at least the interview was fast. So after 30 minute or so, my time came. The usual questions again were asked, like how long will I be in the US and what am I doing there. Which I excitedly replied with, we are going on a roadtrip. haha… I was given a stamp for 6 months again. But of course, we cannot stay more than 2 months because of the business back home. 🙂

You know I really had a good laugh when the Customs Officer asked me these – “Do you have something to declare ma’am? Are you sure you did not bring hopia, dried mango or dried fish?” That was funny right?! ha ha…

Obviously, those are not allowed. So to all my Filipino friends, remember those. I don’t know what the penalties are, but just to be safe, please do not bring anything that would cause you problems upon arrival in America.

So now we have to run going to our connecting flight terminal. Have you ever been to Detroit Airport? It seemed massive to me! I believe it really is.. Because they have a tram/train that would take you from one end of the airport to the other. ha ha… According to our watch, we have a few minutes left before our boarding time. Geee.. that was stressful. And then we found out that the flight was delayed again because of traffic jam again. 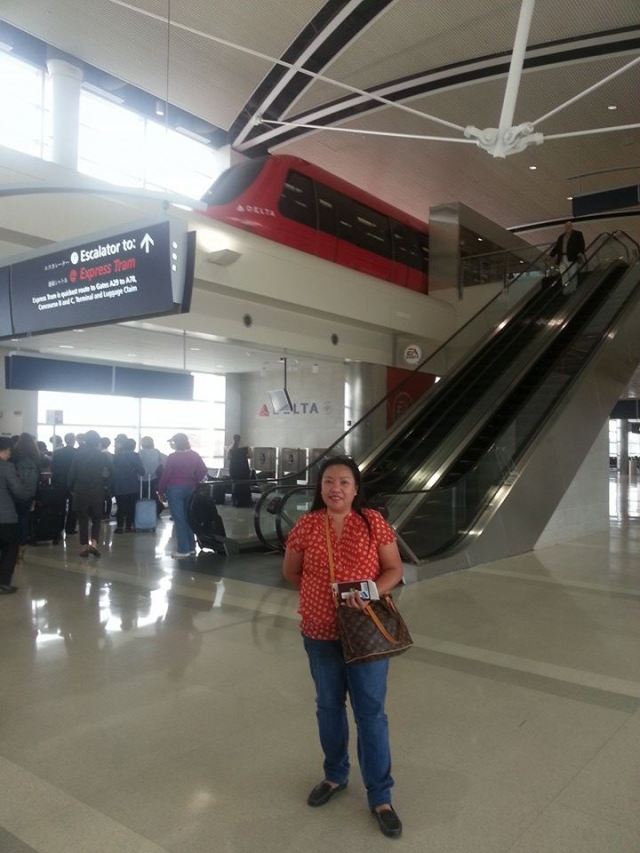 Check the tram above me? hehehe… That’s just so cool to me. 🙂

So our supposed arrival schedule of 3:30pm in New York City was way ,way over. But I’m just glad that despite all the delays , we made it to our connecting flight.

At around 6:00 in the evening, we finally landed in New York City. Woo hoo!

The taxi ride from the airport went well. The airport driver was kind enough to not give us the city tour before bringing us to the hotel. Thank you. 🙂 He just might visit the Philippines because 1) he wants to travel to Asia. 2) John told him how beautiful our country is….

After a few minutes, we have arrived at The Hilton Garden Inn in New York City. This will be our home in the next few days. 🙂

So come back next time guys for my New York Tour blog.  And thank you for visiting my blog even when I was quiet for a long time. 🙂

Thank you Lord for the safe trip.

Businesswoman. Realtor. Photographer. Traveler. Blogger.
View all posts by leawalkerblog →
This entry was posted in Uncategorized. Bookmark the permalink.