Posted on August 14, 2011 by leawalkerblog
Wat Phra Kaew  – commonly known as the Temple of the Emerald Buddha, is considered to be the holiest temple in Thailand.  Before entering the temple, the guards will ask you to remove your shoes and leave it outside. Taking photos inside is not allowed. So I just paid my respects.  The small buddha is made of jade, thus its name, Emerald Buddha. I realized that its name is not based on the stone itself but its color, emerald green. It nestled on top of the temple, inside a glass encasement and is surrounded by several gold plated buddhas.
I love the architecture and the colorful buildings inside the whole complex so I took a lot of photos for souvenir. 🙂 It’s difficult to get a clearer shot though because the temple is surrounded by hundreds of visitors from around the world. 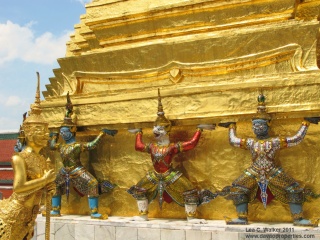 In the same compound where the Temple of the Emerald Buddha can be found, is the GRAND PALACE. Other than its rich history, there isn’t much there except a museum of their olden weapons and some government offices. Like the other buildings, the palace has a grand facade as well.
When we were there, a portion was closed to the public because of a Royal Ceremony being held inside.
My suggestion – never leave Bangkok without visiting these two places.  The visit alone to the Emerald Buddha’s temple is worth it, inspite the scorching heat of the sun and it, being overly crowded. 🙂
Happy travels my friends! 🙂
Lea C. Walker
www.davaoproperties.com