Posted on December 4, 2014 by leawalkerblog

The 42nd St. is one of the busiest streets I’ve seen in New York City.  Let me tell you why.

The Big Apple thrives on subways. I think it would shut down if you try to stop it, even for one day. Seriously. One of the biggest subways in the world, Grand Central Terminal, is located on the 42nd St. Millions of people, tourists and locals  alike, use and visit this terminal to and from New York City.

My New York experience wouldn’t be authentic without “subway-ing” right? So the hubby and sis-inlaw introduced me to it. We started near  49th street and ended at the Grand Central Station.

As we waited for the train, I noticed that the air has thinned. I couldn’t breath well. But I remember saying, I commend the people who do the subway everyday. Maybe someday, we will have a subway station in Davao City, where I live. But for now, I will enjoy the sun and the fresh air  as I brave the crazy traffic downtown. 🙂

I loved the experience of walking underground and waiting for a train. But I don’t think I would like to do it on a daily basis for the rest of my life….

(Above)  John and my brother inlaw, trying to get tickets. 🙂

(Below) Underground shops. How cool is that! 🙂

The Main Concourse of the Grand Central Station.  Its architecture is very impressive. I found it so “sosyal” for a train station. Really. 🙂 No wonder it is part of the tours when you’re in NYC.

The Audio Tour Booth, for self-guided tours. With the New York City Pass, this comes free.

Check the chandelier at the Vanderbilt Hall. 🙂 This used to be the main waiting area. But is now being used for exhibits.

Its regal look made me think how lucky New Yorkers are for having such a beautiful central station. Ka sosyal di ba? 🙂

For more details of the Grand Central Terminal, check this link –

Walking distance from the Grand Central Station is the New York Public Library.  I will redirect you to their site so that you will see how awesome it is. –

I wish we have something like this in Davao….

Months before our trip, as I was looking at google map  trying to figure out where is what, I noticed a small patch of green, called Bryant Park. I wondered why is it there when Central Park is nearby.

When we walked into Bryant Park last October, I realized that with all the hustle and bustle of a city life, it doesn’t hurt to have more oasis in the midst of it.

Since this park is in the middle of Manhattan, people come here to have a break. Have lunch. Have coffee. Sit in the park. Think. Read. Meet friends. In our case, rest.  It is surrounded by huge trees which not only gave us shade, but fresh air as well. It was so relaxing and peaceful. 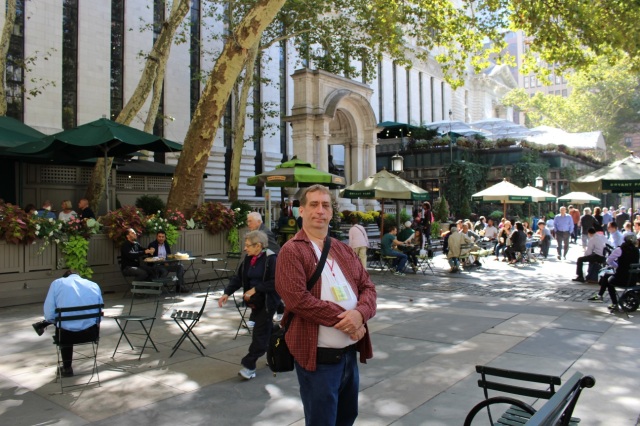 So far, I’ve only seen something like this in America. 🙂  I should have thought of recording her music. But I was so enthralled with everything around me, I forgot. lol  If you ever come to New York, spend a few minutes enjoying the park. And listen to her play. Honestly, I felt lucky I got to experience that.

If you want to read more about the park, check their website here. –

Up next is the start of our 2014 Road Trip. First stop, Lake George in Upstate New York.

Bye for now my friends! 🙂

Businesswoman. Realtor. Photographer. Traveler. Blogger.
View all posts by leawalkerblog →
This entry was posted in America, My Travels. Bookmark the permalink.